Where do you get your ideas from? Who are your characters based on? Are the most common questions I am asked about The Lion & The Unicorn. Or perhaps more accurately people like to offer their suggestions as to what they think my inspirations might have been. When it comes to The Lion, the most popular character for this guessing game, Marv from Sin City is the most common, but Herman Munster is by far the best I’ve heard to date. 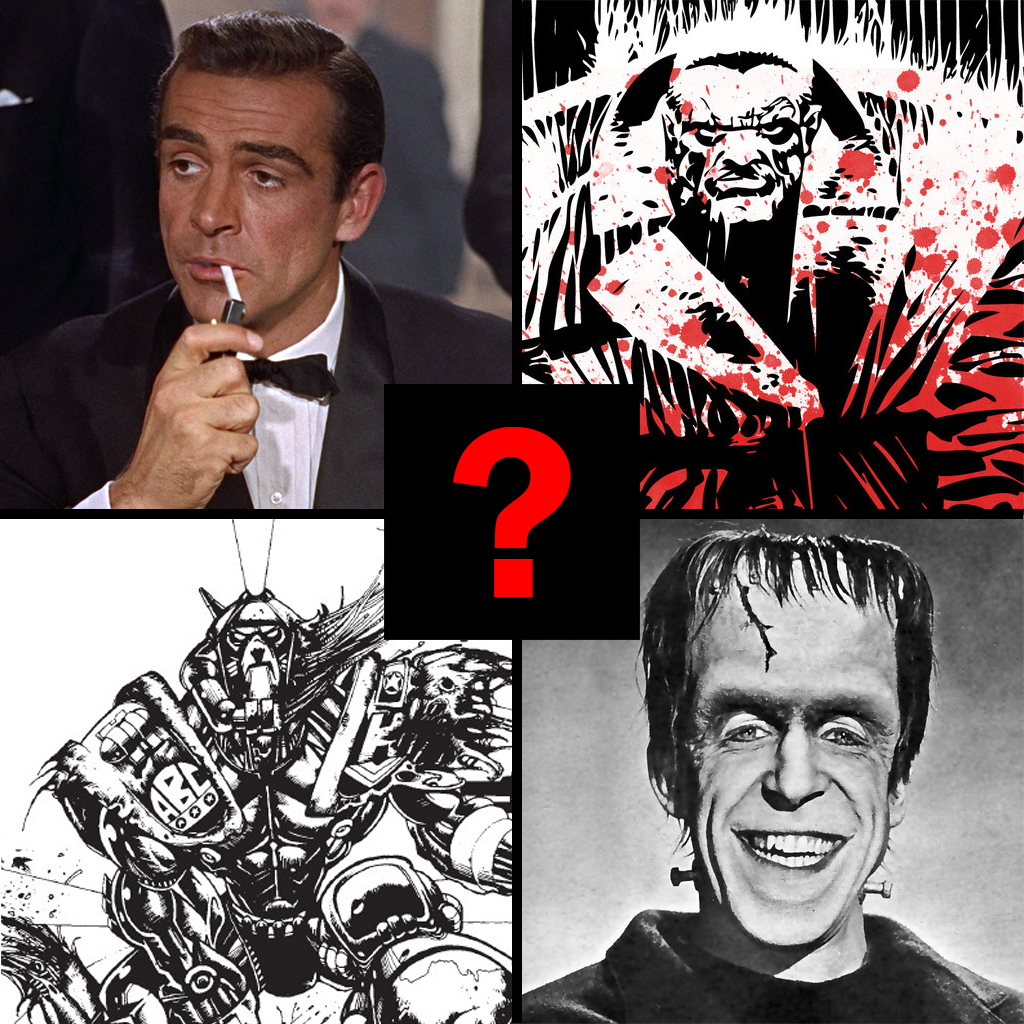 The Lion is undoubtedly influenced by characters from the cult-ure I’ve grown up consuming – I’d actually put him somewhere between James Bond and Hammerstein from the ABC Warriors (Maybe with just a touch of Herman?) – but in truth it goes a little deeper than that. For the Lion is actually based on… Wait for it – This is the big reveal, the one you’ve been waiting for. Drum roll please… My father!

Or to be more precise the good bits about my father – and if you see what an absolute, total arsehole The Lion is that probably tells you a little bit about my old dad.

The Lion, like my father, is an embodiment of 20th Century England. From the Great War to TV dinners to Maggie Thatch. A broken promise of a century, deeply scarred, selfish and bitter, racked with the pain and regret of a nation fallen from greatness but not willing to admit that it no longer rules the waves, or indeed anything at all. My father was a man not willing to admit he was broken armed with an impenetrable shield of cynicism and a sword of super sharp, acerbic wit. Abrasive and offensive but with a strict (a)moral code, suited to an age when you could still be outrightly rude. When you could still smoke everywhere and be prejudiced against pretty much everything.

My father was born in 1945 raised in the mythical kingdom of Essex by his parents, effectively Victorians, the kind of people who loved the dogs more than they loved their children. He grew up to be in his own words,‘a right little shit’, but by the time I knew him he had matured into a grumpy old bastard. He worked as a solicitor, a job he clearly hated so as to send my sister and I to private schools we didn’t want to go to. He was often absent, I naively thought, working late, until it became apparent, even to the most idealistic young eyes, that where he’d actually been was ‘down the pub’.

Like many of the men from his generation he grew up massively emotionally retarded, perhaps even more so than most, but the biggest regret, the greatest tragedy for him and so many like him was, he knew better. He had had the knowledge and the opportunity to change, to live a different life, to be different man from his father. He’d had the 60s revolution in the head but woke up on the cold Monday morning of the 1980s with two children and a mortgage and the overwhelming need to get paid! Which he did to the detriment of his happiness and the happiness of all those around him. He was inherently self destructive, looking after yourself was for girls, smoked 60 – 80 cigarettes a day and despised any food that wasn’t entirely synthetic –  “Yuck! This banana milkshake tastes like real bananas. Where are the e numbers?” – Hilarious until he dropped dead at the stupidly young age of 62.

It was never my intention to create a hero based on the old bugger – Lung Cancer Man! Coool… In fact I didn’t even realise I’d done it  until working on a ‘pin up’  image of an earlier iteration of The Lion & The Unicorn, he looked over my shoulder and, taking an an uncharacteristic interest in my funny pictures he said – “He looks like quite a good chap”.  High praise indeed. 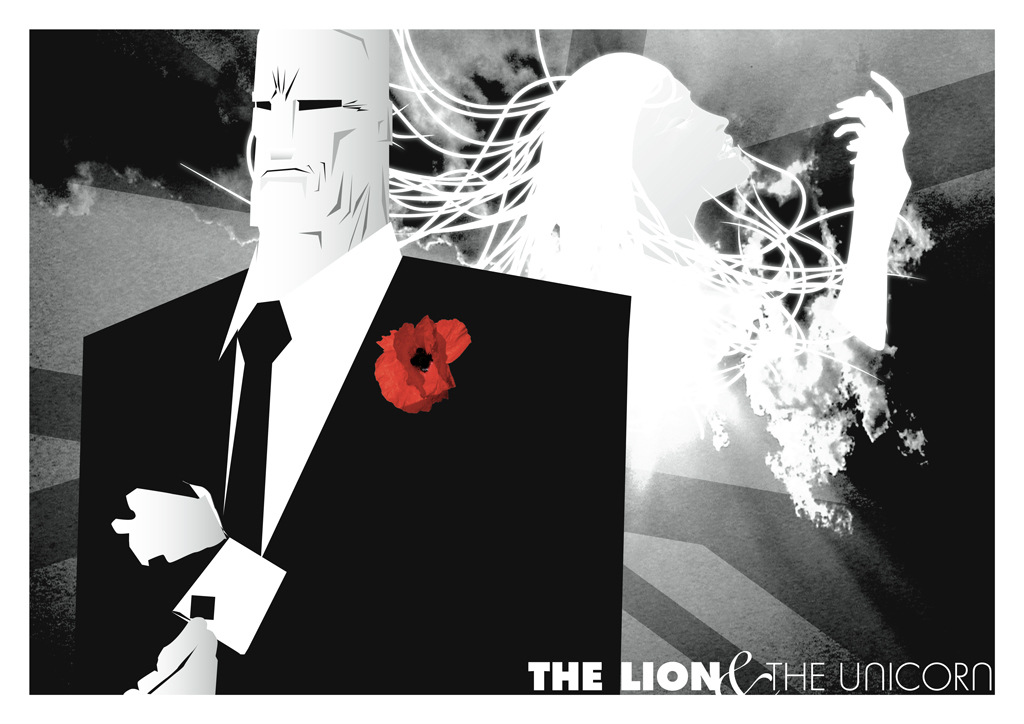 I hadn’t created The Lion in my father’s image consciously, he evolved and became more and more like him – white hair, white face, sarcastic old bastard – but it was only when the penny dropped, when I realised what I’d done that the character really came alive.That’s when I knew exactly how he would speak, how he would react in certain situations. And it was only after my father died in 2007, just after the release of the original Thamesis digi-comic series, that The Lion could really live. That’s when he could become the embodiment of the bits that, despite myself, I loved about my dad – his sense of humor, his nihilistic belief system, his sense of right and wrong and somewhere deep down inside a mischievous, childlike joy. But as all art is catharsis I needed somewhere to put the bad parts, the parts that really pissed me off. Enter Old King Richard of The Rose the embodiment of unfulfilled potential – the coward who has absolutely not put his house in order despite the ample opportunity to do so. If you read Jonathan’s last  conversation with his father (as told in Flashback in The Lion & The Unicorn Volume 0 Book 3) you will see the conversation I wish I’d had with my dad on his deathbed. 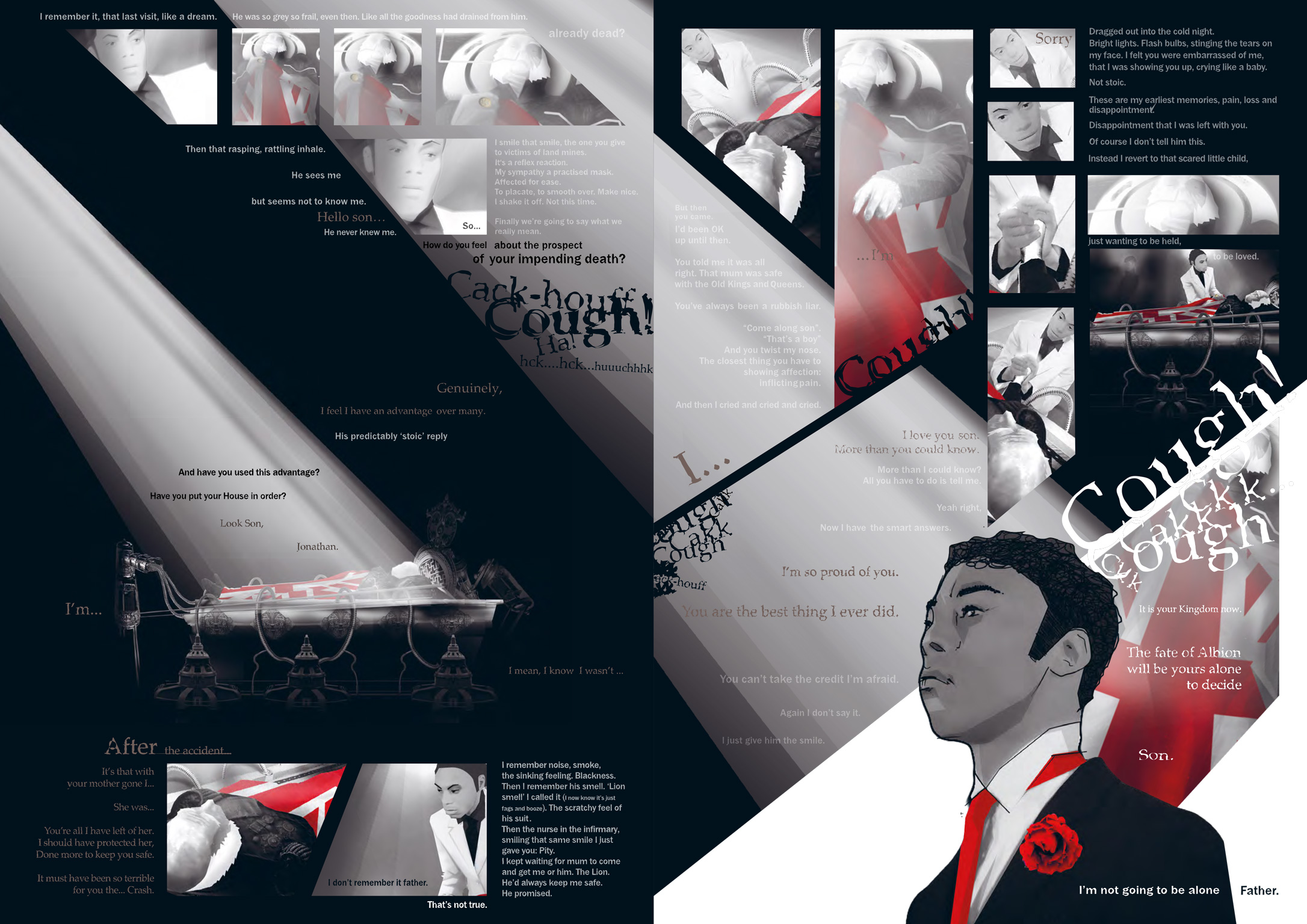 I did say to him on our last and only trip together – to Portmeirion, the Village where they filmed the cult 60s TV show The Prisoner, a favourite of ours – “How do you feel about the prospect of your impending death?” and he said to me “I have an advantage over many” – where Jonathan presses the issue I leave it. And that was the end of it literally, he died 3 months later. The Lion, for now, lives on and at least, on paper has the chance, the potential to change and be the best he can be. I’m not saying he will. It depends how much of my dad is in him. Good bye old man. The King is Dead, long live the Lion.