By James William HarrupDecember 30, 2020 No Comments

Come on then, let’s be having you.

I’ve held my tongue, bit my lip and now it’s boiling up bursting out, breaking, breaching, on the brink of the blasphemous but I can’t keep it bottled up… B… B… B…

It’s a brand you know? Brexit. The British – it’s ok, for me to say, I used to be one – Oooh they love a good brand. Oh, they do, they do, they do. A ‘thing’. Everything’s got to be a thing. And that I’m afraid is precisely the problem, Brexit was a good thing, it was a brand and a far better brand than… What? B… B… B… Bremain?! Lame. Yes it was a vote for a thing, for some-thing, rather than nothing. Yes it was action, it was movement. And best of all, a great big juicy up yours to the man.

Admittedly the wrong man. Yes, yes, that is indeed as you might say erm…True. Ironically, yes, it should have been ahem, precisely the man that was, certainly from one point of view at least, perhaps, well, propagating the proposed idea in the first place…

Enter The Minister Prime, Camer-On – this was his cunning trick, a deft, sleight of hand, to build up in the people’s minds the idea of independence – for Harry, England, and Saint George! And then turn it around, to be the conquering hero returned from the noble quest – “T’is good, I’ve been to the distant lands of Eurp, I’ve subdued the wildlings there. And lo, all is ok now, go back to sleep.” But no, the cunning troll Bojo saw the shiny prize, the light in the people’s eyes, for after all this was his tale, the evil kingdom of Brussel with its bizarre straightened bananas, this was his yarn and now was his chance to weave it into the new clothes he would need to become emperor of these mythic isles. And weave he did.

Burt not to worry what’s done is done and that’s all there is to it. Spit spot. Mustn’t grumble. We certainly can’t turn around now and say sorry or anything like that. No, no, we shall not be admitting that it was all a bit of a mistake and was never meant to get this far. We shan’t ever say ‘sorry please can we come back and play with you and then let’s never talk about it ever ever again’.

I don’t Know why You say goodbye

Time to sail off, alone into the mist, back to a time when Britannia ruled the waves – Gentlemen, the Queen! We are not amused. And on, to Empire. Don’t mention the war… By which I mean always mention the war – well, basically it’s the last time the poor old girl won anything. Except for 1966 – 30 years of hurt and then some.

Sorry old boy, Churchill ain’t nothing but a nodding dog now. ‘Oh yes’. Queen Victoria is dead and so is the Maggie Thatch, but long live Queen Britannia – The self referencing regurgitating Britain of bowler hats and blitz spirit. Sprinkle on a bit of Sergeant Pepper, a dash of ‘cool Britannia’ (Blairf!). Mix it all up – Shaken, not stirred and set it off with a funny walk, while that old timey voice narrates its perpetual death rattle. A wind up homunculus, the PR effigy of a self image that never ever really was.

Hey, hey, hey, don’t get me wrong me old mucker me old mate, me old china. I’m not saying don’t be proud of your country, I’m just saying, what defines your country – what agency did you have over the place you happened to be born in? How is it any of it actually yours to be proud of? Whoa there, easy tiger. Calm down dear – I love Yorkshire pudding, I love sausage rolls and pork pies and real ale. As you do, I love the fact the British police don’t carry guns and I think the electrical plugs and sockets are, quite simply, the best in the world. And of course, of course, of course, I love the language, I love its versatility and mutability. Its delightful penchant for nonsense. See what I did there? Absolutely nothing. I had as much to do with any of it as I did with espresso, with Pastel de Nata, chorizo, pinot noir, Kraftwerk or the Acropolis… Why can’t I love that too,? Why can’t we all have it all?

When you think about the story of the future, when you dreamed about the world to come what did it look like? Was it one of separation and division, of bigger walls, border patrols and razor wire? Was it one of increasing separateness, of increasing otherness, of them and us of distrust. Or was it one of coming together. Of unity and peace – you scoff but the European union was born out of peace and has maintained peace between this traditional collection of enemies for longer than ever in the history of the world. Pax Europa!

Oh yes, full disclosure, I live in Europe, well Germany to be precise (Europe’s not one country, like Africa you know), Berlin in fact – Yes. say it loud I’m hipster and proud (Well I used to be, now I’m in that awkward stage – too old to be a hipster, too young to be eccentric). And it’s not just for the free higher education, fantastic health and child care and a government who seems to actually care a teeny tiny little bit about its people – Something I’ve genuinely never experienced before in my life. God save the queen. No, It’s the freedom, the freedom to travel, to move at will, to enter a country without a passport, and more, the freedom to define myself as whoever I want to be.

This is especially true in Berlin, a city that’s defining itself as it grows, in a country that is unable to look back, unable to glorify it’s past atrocities, the way Britain does.

In English schools we learned about Henry VIII and Queen Elizabeth, a bit of civil war and industrial revolution then straight to the World Wars and look at how bad they are. Not a mention, not a sniff of the atrocities perpetrated in the name of empire. But we do know, we know something went down – it’s in the collective unconscious, the awkward polite racism. It’s in the mindset. Fortunately I would argue living anywhere other than the country you grew up in frees your mind. Not only does it allow you to look back and see your ‘home’ from a new perspective. It actively deconstructs the concept of normal. 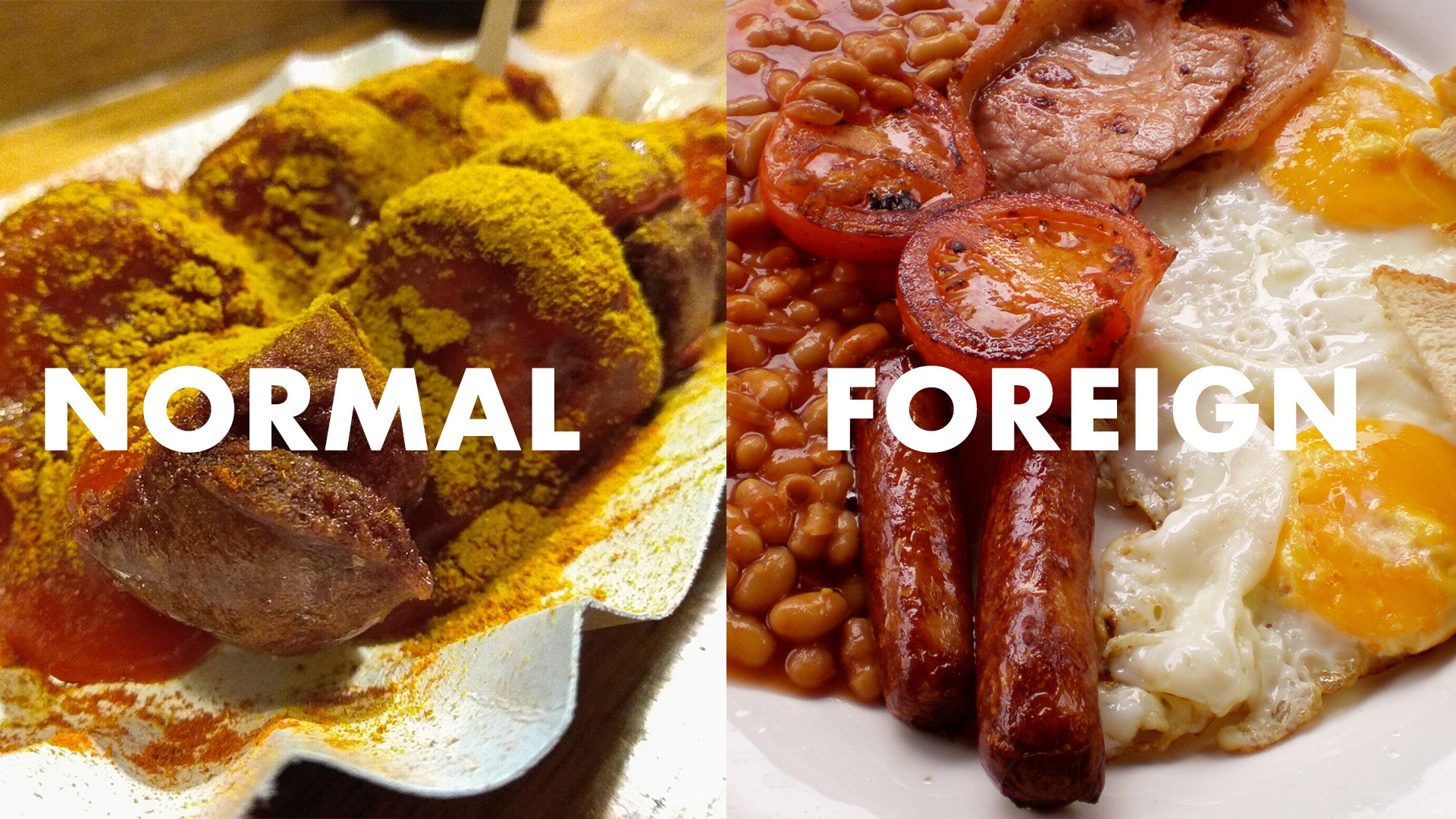 When I moved to Berlin, now my home of 8 years, I would often enjoy the local delicacy of currywurst. Enjoying this delicious, but ‘funny, foreign food’. It took a few years but then it dawned on me – it’s not foreign, I am. But no, no, that’s not right I’m not a, not a… Foreigner – I’m… Me, I’m normal – and just like that the whole concept of foreign, of the normal and the other, of us and them simply fell apart. Revealed as a paper thin construct – the illusion of separation.

Yes it’s a liberating experience, to shed the national skin. To emerge from the cocoon you were incubated in and spread your wings and fly free, to go anywhere and be anyone you want to be. Reborn as a citizen of the world. Because that was the story of the future that resonated with me. Star Trek with its united federation of planets. Of which the whole Earth was but one member. Beam me up Scotty. That’s where I want to be.

So long and thanks for all the fish (n’ chips)