By James William HarrupDecember 20, 2021 No Comments

The Santa-claus conundrum or how I learned to stop worrying and love the story of Christmas.

I have a problem. I’m talking about Father Christmas, dear old Santa, rosy cheeked, kind and cuddly, lovable old Saint Nick. What’s my beef with the jolly old chap? How is it I can possibly have a problem with such a universal embodiment of pure yuletide joy?

I’ll tell you why – Like another old, bearded, omniscient white guy who lives at high latitudes, he makes me feel a teensy weensy bit uncomfortable. Or rather it’s the belief in him and what that belief can be used for – to be precise, it’s the belief I’m currently instilling in my 3 and a half year old.

I mean how far do we take it? I don’t want to ruin the magic of Christmas before it’s even begun but it feels wrong. The belief in a mythical being. An all seeing, every present judge and jury. Or rather the fear of what this being can and will do to you – Oh no, not your God, no I don’t mean him. I mean all those other cooky kranks. Whoeee what were they thinking, right?

But it’s more than that, I’m using the promise of reward by a mythical being that I don’t believe in. That I know is a lie. Obviously I can’t prove that your mythical being doesn’t exist, nor would I want to, that’s your story. But at least the people who told you that story believed in it and perhaps you’ve amended it, done a bit of creative editing to make it work with your own story. That’s fine. When there is belief, who needs proof? The value of a story isn’t in its proof, it’s truth. No, it’s in how it makes you feel, the thoughts and emotions it inspires and how they in turn make you act. And at the moment, I’m sorry to say Santa is keeping my little boy on track.

Or rather his belief is. His belief in a story. A story of an all seeing, omni present father figure capable of rewarding or punishing (by which I mean withholding reward, I’m not getting Knecht Ruprecht on his little three year old ass) at will. A being capable of delivering pure joy or absolute crushing despair (Look, the Paw Patrol, Mighty Pups Action Pack Gift Set means a lot!). The belief in this supernatural being, is working, it’s making him do what we want – “Don’t shout or father Christmas won’t bring you… Eat your porridge otherwise… You’ll put on that itchy hat if you want Santa to….” – and I don’t like it.

Any half decent child care website briefly skimmed while sitting on the toilet (that’s parenting!) will tell you threatening and withholding or removing doesn’t motivate children, or indeed anyone. It may get them to do what you want in the moment, but it won’t make them happy or satisfied or behave well in the long term.

Awww, but come on that doesn’t mean you have to get rid of Santa. I mean he’s… Santa. Santa!? He’s a good guy right? A story wrapped in stories. Our very own modern myth, a capitalist god-form, scrubbed clean of any Christian connotations and clothed in coca cola’s corporate livery. He’s our little bit of magic and don’t we all need some magic at this time of year, especially this year, a little light twinkling in the middle of the dark? 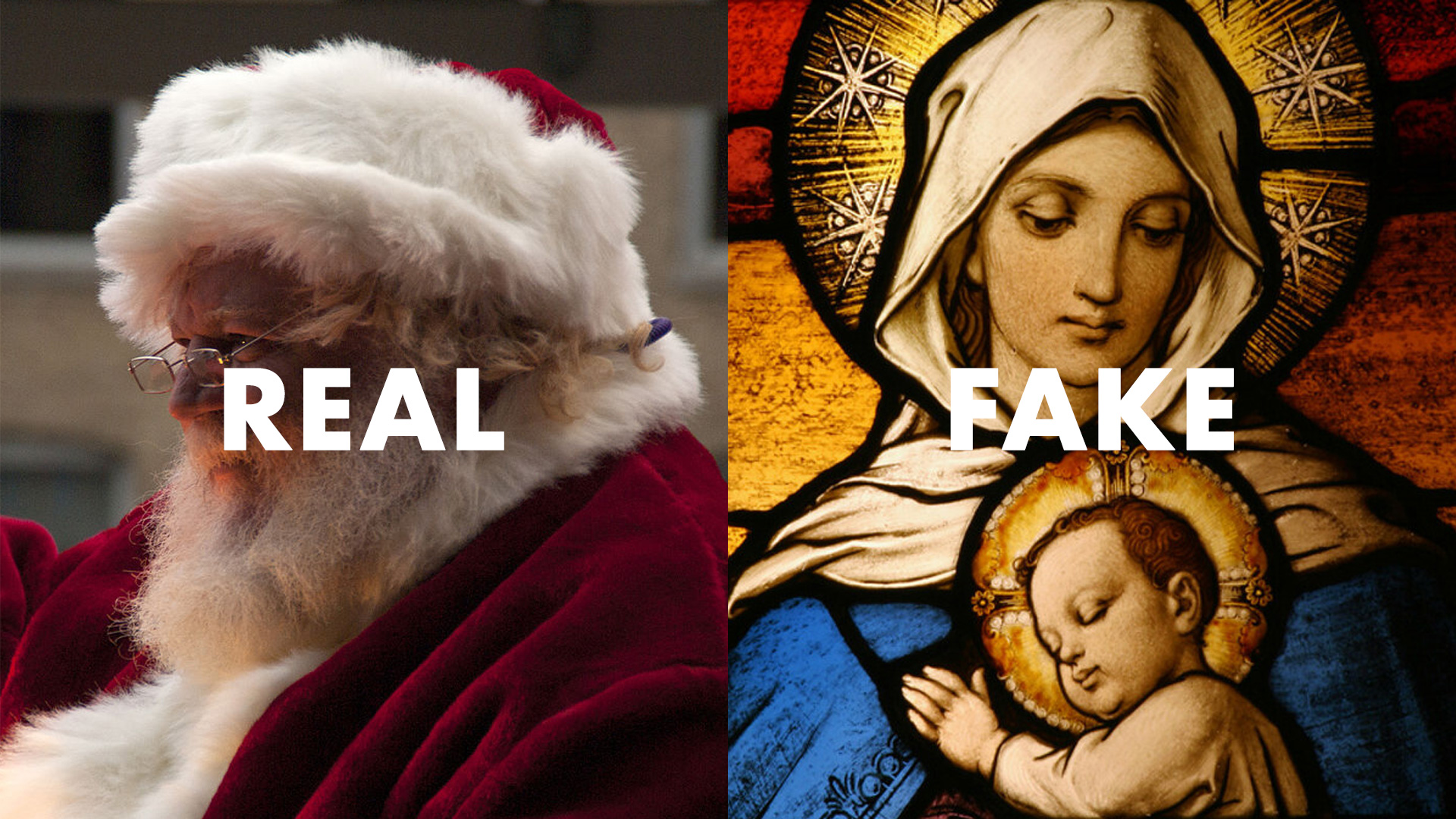 Does it really matter we know he doesn’t exist (I’m hoping we’re all adults and I’m not ruining anyone’s Christmas here. Spoilers!). What’s ‘Real’ good for these days anyway? Not for news, not for entertainment. We no longer care that soap opera actors aren’t the characters they play, or that reality TV is scripted. We are recrafting reality in the image of our stories, more so than ever before. So what’s one more.

Bigfoot may have trod his last. Nessy (that’s the Loch Ness Monster to you) may have been scientifically proven a smudge on the lens. The mystery and wonder are being empirically expunged from our lives so won’t you give us our stories. At least give us that, let us have our make believe. At least let us have Santa. He’s the embodiment of human willingness to suspend disbelief. We love it, by jove (short for Jehova) we need it.

And so do I. And so does my little boy. So I let my son have him. Because, as with all stories, all belief it’s not the story that’s the problem, it’s how we use it. Not to oppress or control but rather to uplift and inspire. So I’ll let Santa inspire some magic. Stupid old reality can wait til you’re older.